A Remedy for Appearance Obsessions 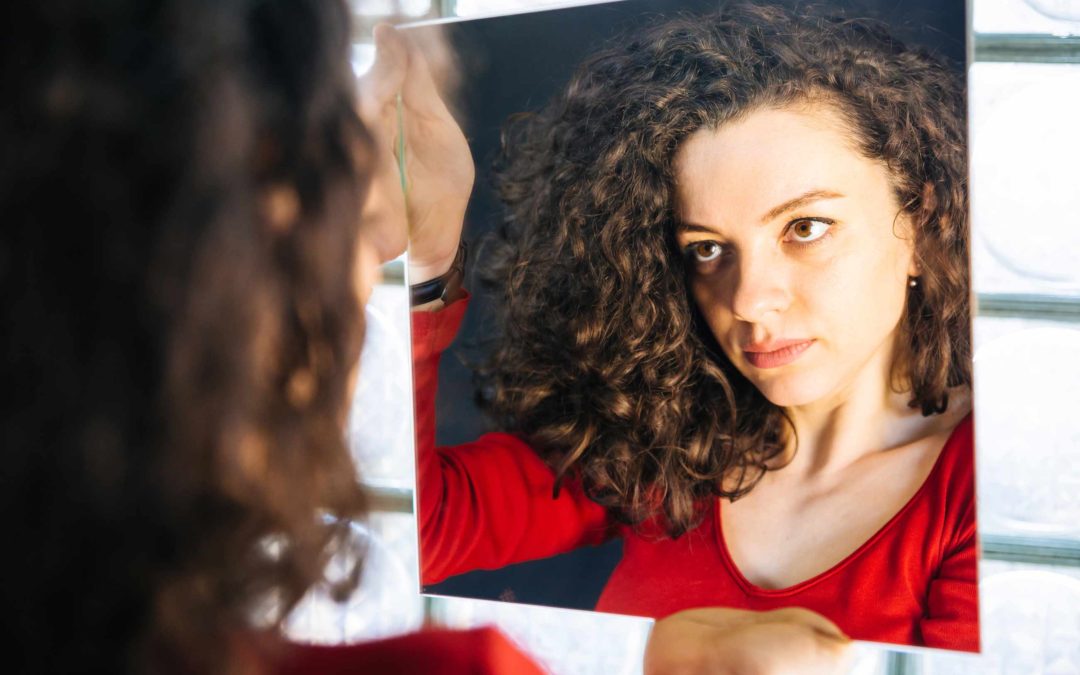 When people find out I teach mirror meditation, they often say, “I hate to look at myself in the mirror!” Followed by The Trifecta of Self-Cruelty: “I’m too fat, I’m too old, I’m too ugly.” This Trifecta, as I’ve come to call it, has many variations, but they all have one thing in common: They’re terribly unkind ways to see yourself! Studies find that 80% or more of people are not content with their appearance.

Looking at How You See Yourself
For some, criticizing their appearance becomes almost an obsession. The mirror can play a powerful role in triggering that obsession. For instance, Clare was habitually transfixed by the mirror. She couldn’t stop noticing all her flaws and imperfections. She spent a fortune on all the latest cosmetics and hair products that she thought would improve her appearance. To everyone else, she looked like a bright and beautiful woman – and she received a lot of compliments. Yet, she was never satisfied with the way she looked. As she gazed at herself, her glossy lip curled in disgust, turning her head to scrutinize her image from every possible angle.

As she looked at herself in the mirror, I suggested that she simply be aware of her thoughts, without trying to fix anything. It wasn’t easy for her to do. Within a few seconds, she had a whole list of things she saw that were wrong with her appearance. I challenged her to take an observer’s perspective and simply watch herself criticizing herself in the mirror.

The shift in focus allowed Clare to become more aware of how much her own thoughts were affecting her. She was able to shift her focus from seeing her supposed imperfections, to seeing herself as the recipient of her own harsh judgments. She suddenly realized how unkind she was being to herself!

It took practice for her to break the habit of looking through critical eyes. Eventually, she came to understand that she was creating her own suffering because she could see it on her face. She then knew that she had the power to shift her perspective anytime – and the mirror could help her do it.

Shift from a Problem to a Solution with the Mirror
The mirror provides a way to externalize what’s happening in our minds. We have a different perspective and see how our own thoughts are affecting us. For Clare, the mirror meditation wasn’t about saying affirmations that she was beautiful to override her habitual criticisms. Instead, it was a practice that helped her realize how downright cruel she was to herself! She felt sad when she first realized the full impact that her own criticisms were having on her wellbeing. This motivated her to choose to treat herself more kindly. Her new attitude toward herself led her to treat others with more kindness too. And, once she began to spend less time and energy focused on her appearance, she discovered that she had more time to pursue her passions.

As you look in the mirror, can you see yourself as the recipient of your criticisms instead of the object of them?

This website uses cookies to improve your experience while you navigate through the website. Out of these cookies, the cookies that are categorized as necessary are stored on your browser as they are essential for the working of basic functionalities of the website. We also use third-party cookies that help us analyze and understand how you use this website. These cookies will be stored in your browser only with your consent. You also have the option to opt-out of these cookies. But opting out of some of these cookies may have an effect on your browsing experience.
Necessary Always Enabled
Necessary cookies are absolutely essential for the website to function properly. This category only includes cookies that ensures basic functionalities and security features of the website. These cookies do not store any personal information.
Non-necessary
Any cookies that may not be particularly necessary for the website to function and is used specifically to collect user personal data via analytics, ads, other embedded contents are termed as non-necessary cookies. It is mandatory to procure user consent prior to running these cookies on your website.
SAVE & ACCEPT

We respect your privacy. Your email will not be shared with third parties.

Sign up for the Mirror Meditation News and Events